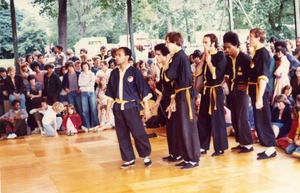 At the age of 12 years he took up boxing in the London Catford and District boxing club where he would often see and receive encouragement from the Cooper twins, Henry and George. In 1961. he entered the junior ABA boxing championships, where as well winning the London finals, he also received a special award for the best stylist of the competition. At the age of 16  he developed a strong interest in the oriental martial arts together with the philosophical background of Tao and Buddhism.
In the early 70's he commenced a fulltime study and practice with Prof Chee Soo in various aspects of the Chinese martial and therapeutic movement arts, and later began assisting Prof. Chee Soo in the London Wu Shu School. Parallel to these studies he also qualified in various massage techniques with the ITEC, therapeutic sports and relaxation massage as well as reflexology. In 1977 he received the Master Title from Prof. Chee Soo in his soft style of chinese boxing. In 1979 he became a full member of the, Faculty Of Physiatrics'. In 1977 Rupert F. Shonaike started teaching in Germany on the invitation of the former Mr Universe (Body Builder) Karl Blumer. It was from this time that the Tai Chi Studio Köln was conceived and opened.


In April 1992 - On a personal invitation from Anthony Robbins, he attended a four day seminar in New Jersey, USA which included fire walking and various aspects of self development training. Anthony Robbins is the author of the world best selling books, Unlimited Power' and, Awake the giant within'.
On his return he developed Programmes for the Clients and business managers of  corporate insurance companies, banks and Ford Motor Company (Europe). In 1995  he began working with Companies developing a Health and Tai Chi Stress Relief  programme for Companies and Corporations  Here are some of the Companies  in our portfolio.

The Yeung Ma Lee family style for the intermediate and advance level of participants includes the Yeung family Softening and breathing movements. Form Correction, as well as specific excercises developed within the family